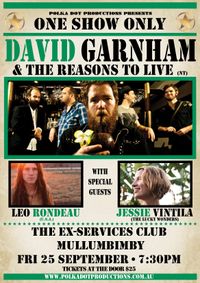 Jessie Vintila, (The Lucky Wonders, Raise the Roof Gospel Choirs) described by The Age as “a true singer”, did a lovely solo set, then was joined by Emma (Lucky Wonders) and Amber Weedon on a number of songs. www.theluckywonders.com

Opening the night, on his first Australian tour, was Leo Rondeau from Austin, Texas. His family lineage includes members of the Turtle Mountain Band of the Chippewa Indian Tribe, from North Dakota, where he was born. www.leorondeau.com